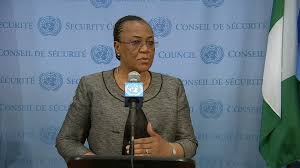 In a statement yesterday, by the Spokesperson to Mrs Ogwu, Dr. Tope Adeleye Elias-Fatile, said this will be the first time in the history of the UN that an elected member of the Security Council would assume presidency of the Council for the 4th time in two separate tenures within 5 years.

“This is the fifth time since independence that Nigeria has been elected to serve on this most powerful decision-making organ of the United Nations charged with the responsibility of maintaining international peace and security.  Nigeria previously served on the Council from 1966 – 1967, 1978 – 1979, 1994 – 1995 and 2011 – 2012.

“Nigeria’s return to the Council in January 2014, after having left only in December 2012, represents one of the shortest periods in the annals of the United Nations that a Member State has spent between two terms on the Council. This is even more remarkable as it is occurring under the institutional memory of the same Permanent Representative, Ambassador U. Joy Ogwu.

It said wide consultations with various stakeholders had begun on Monday 27th of July, 2015 towards Nigeria’s assumption of the presidency of the Council.

“With the support of other members of the Council, Nigeria will use its month-long presidency to actively promote the cause of international peace and security in line with the principles of the UN Charter and the mandate of the Council,” the statement concluded