The central Bank of Nigeria “CBN” has, on Monday, Dissolved the Board of Directors of Ailing Skye Bank Nig Plc. Following the Development, A new Chief Executive Officer and Chairman has been appointed. Mr Adetokumno Mukhail Abiru (Fondly called Tokumbo), a Harvard Trained Accountant is Skye Bank’s New CEO. See Picture and More Details after the cut . . . 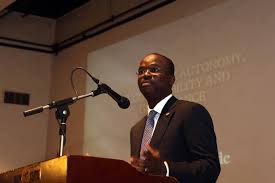 Adetokunbo Mukhail Abiru (Tokunbo), is an alumnus of Harvard Business School (Advanced Management Program) and Lagos Business School (Senior Management Program). He holds a B.Sc (Economics) from Lagos State University and is a Fellow of The Institute of Chartered Accountants of Nigeria (ICAN) and an Honorary Senior Member of The Chartered Institute of Bankers of Nigeria (CIBN).

Tokunbo has had a distinguished career in banking spanning about 26 years, of which his early ten (10) years were spent in the formative years of Guaranty Trust Bank Plc.  Thereafter, he spent about Fourteen (14) years with the premier and most valuable banking brand in Nigeria, First Bank of Nigeria Limited, where he functioned as Executive Director, Corporate Banking between 2013 and 2016.

Tokunbo was the Honorable Commissioner of Finance for Lagos State Government (2011-2013), the economic capital of Nigeria, during the dynamic and transformational leadership of Governor Babatunde R. Fashola (SAN). He is happily married to Mrs Feyisola Abiru, the Managing Director of Home & You Limited, a truly indigenous furniture manufacturing company, and they are blessed with children.